Our day of departure draws closer.  With only two days until Christmas, we are preparing to spend time with family over the holiday, a birthday just after Christmas, and then our move overseas before the new year. At this point, the reality of the changes ahead has not fully set in. While there are a few last-minute details to work out, we are essentially ready. We are thankful for your continued prayer. We had the opportunity to speak to a few churches and small groups before leaving, but did not have enough weekends available for all who invited us. For those interested, I share the substance of our message in this post. We also shared our testimonies, yet I will save those for future posts. We hope you all have a lovely Christmas! Our message:

No wound? No scar?
Yet, as the Master shall the servant be,
And pierced are the feet that follow Me.
But thine are whole; can he have followed far
Who hast no wound or scar?

As we have pursued missions, many people have asked us how we can give up a comfortable life here in the U.S. to be uncomfortable, maybe even to suffer, for Christ. But what did Christ do for us?
Philippians 2:5-8 says, “Let this mind be in you which was also in Christ Jesus, who, being in the form of God, did not consider it robbery to be equal with God, but made Himself of no reputation, taking the form of a servant, and coming in the likeness of men. And being found in appearance as a man, He humbled Himself and became obedient to the point of death, even the death of the cross.” Jesus was willing to give up heaven itself to come to earth and suffer, in order that we might be saved. If he calls us to leave our homes and take the gospel to those far away, even if it’s hard for us, even if we suffer, how can we not obey that call?

While in Togo for our three-week survey trip to the hospital there, I treated typhoid fever and saw syphilis, Hepatitis B, and tuberculosis. And I treated so, so much malaria. 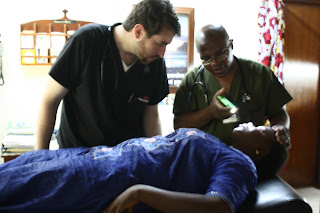 On my first day in the hospital in Togo, two children who were about 2-3 years old came to us with high fevers and they were having seizures – they both had the most severe form of malaria (what we call cerebral malaria, where the disease has affected the brain) – partly because they had not been brought to us sooner. We treated them both appropriately and prayed over them – we pray for every patient we receive in the hospital there. I prayed the same prayer for them that I pray over my own children when they are sick: that they would be healed, that they would have strength, and that God would use them mightily in His kingdom. The next morning, the little boy was sitting up and eating- he was going to be well. The little girl had died in the night.

This is a daily reality in the hospital in southern Togo, indeed in much of Africa. And it’s heartbreaking. And yet, our goal is not primarily to make people well. Medicine is a great way to bring people in and to show them Christ’s mercy, but we are more concerned about showing them Christ.

There are many medical needs in Togo, but the spiritual need is far greater. Many there worship ancestors and spirits. Child sacrifice is still practiced by some (it’s illegal, but it happens). Muslims are working hard to spread Islam in West Africa right now.

We do teach about medicine, clean water, and hygiene, but the heart of the issue is Christ – He is the only true answer for poverty, for disease, and for the murder of children. Christ said in John 8:12, “I am the light of the world. He who follows me shall not walk in darkness, but have the light of life.”

Jesus is the answer now, just as He has always been.

Brother Andrew was a missionary and Bible smuggler to communist countries. He said, “The real calling is not to a certain place or career, but to everyday obedience. And that call is extended to every Christian, not a select few.”

I encourage you to live in obedience to Christ today – your ministry may be right here or it may be far from here. Do it even if you’re not perfect – Christ is perfect in you. You may be familiar with the lyrics to the song “Come Ye Sinners, Poor, and Needy” by Joseph Hart that go, “if you tarry till you’re better, you will never come at all.” Similarly, if you wait until you are perfect or until you feel ready, you will never go.

I would also encourage you not to be afraid of being uncomfortable. That certainly applies to going to a foreign country, but it also applies to moving beyond your own comfort zone – perhaps telling someone about Jesus.

Now, I was told by some people to go on more short-term trips to make sure missions was right for me. They would say, “what if you don’t like it?” or “what about your safety?” or “what about the health of your children?” It doesn’t matter. We are called. John 14:15 “If you love me, keep my commandments.” Philippians 1:29 says “For to you it has been granted on behalf of Christ, not only to believe in Him, but also to suffer for His sake…”

But the good news is, the suffering is not the end! I started this message with Philippians 2:5-8, speaking of how Jesus was willing to suffer for us. But that is not the end of the story. Verses 9-11 say, “Therefore God also has highly exalted Him and given Him the name which is above every name, That at the name of Jesus every knee should bow, of those in heaven, and of those on the earth, and of those under the earth, And that every tongue should confess that Jesus Christ is Lord, to the glory of God the Father.”

The story doesn’t end in suffering. It ends in glory and victory.

Romans 8:17 says we are “heirs of God and joint heirs with Christ, if indeed we suffer with Him, that we may also be glorified together.”

To echo the above poem, “And pierced are the feet that follow Me.”

Be encouraged – He has a mission for you. There may be some difficulty or discomfort along the way, but it’s worth it.

Live in His will for you today.
Posted by Seth and Becca Mallay on Wednesday, December 23, 2015