Christian parents, you are tasked with mission work

My wife was raised on the mission field as a missionary kid, an “MK” as they are known. She felt the Lord calling her to a life of service in missions when she was ten years old. Likewise, I was only seven when I felt the Lord calling me to medical missions one day. Both my wife and I loved learning about missionaries when we were children. Most of our heroes were, in fact, missionaries. Names like Amy Carmichael, Hudson Taylor, Nate Saint, Adoniram Judson, and Gladys Aylward were names well known to us from childhood. Certainly, these were important kingdom workers. Having been called to mission work ourselves, we had likely idealized the work and lives of these brothers and sisters. Perhaps you have as well.

While working toward our goals and eventually on the foreign field, we quickly came to realize that “the mission” isn’t just given to a select few among the body of Christ. Sure, each member has different abilities and functions, but every one of God’s children has been given a gift worthy of sharing. Not only should we as Christians share the gospel simply because it is worthy, but we also should do so because Christ commanded us to “make disciples” (Mat 28:19). Some are called to take that work to “all nations.” While some are indeed called to send those whom we have labeled as missionaries, no believer in Jesus Christ is called to withhold the good news. None are exempt from the imperative to make disciples.

Another thing we learned in long-term mission work was that living and working overseas, as exotic as it may sound, is in many ways just living and working. Things which seemed so strange, cultural differences for example, grew familiar. While walking to the mission hospital some mornings, I would marvel at the mundanity of life even in the midst of foreign ministry. Getting up in the morning still was a chore. We still brushed our teeth and had bills to pay. We walked the same earth under the same sun. I found that I still had to be intentional about ministry in the midst of life and work: sharing Jesus with the world didn’t become automatically easier just because we were in a foreign land. One part of life which also continued as normal was the raising of our children.

We moved overseas with four children, had a fifth on the mission field, and have since been joined by number six. Even before moving overseas, we had recognized one of the greatest ministries that God had given us: our children. Raising a family can seem like one of the everyday things that just happens while we accomplish other great things in life. Certainly, a family can be raised passively. Most parents are probably, at least sometimes, guilty of simply getting by rather than focusing on the actual task of raising children.

My wife and I have become more convinced than ever that, during these few precious years that we have with them, one of our primary ministries is to our children. This does not diminish the other work that we have, any more than it does for anybody else. Remember, each believer in Jesus has the responsibility to make disciples. What a joy and a privilege for my wife and myself to have been given six children to whom we can teach Jesus Christ. Eighteen years of discipleship is no small thing! As parents, we have such an opportunity, such a ripe mission field. This is true no matter where the Lord has placed us. While we are called to be ambassadors to the world, what better place to start than with the family God has provided. I encourage anyone who still has children at home to make every effort to make their own children their primary mission field. 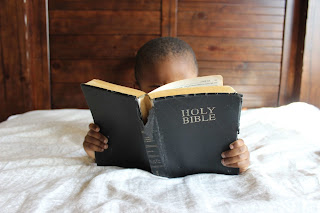 Scripture supports the teaching of God’s word to our children. Deuteronomy 11:18-19 highlights the importance of “laying” or “fixing” God’s word in our own hearts and then teaching it to our children. Most of us are familiar with Proverbs 22:6: “train up a child in the way he should go.” Paul also charges fathers in Ephesians 6:4 with discipline and instructing children in the Lord. These passages are not describing a passive process of cohabitation and provision of food. This, like any other ministry, is a true spiritual battle, and our children are no small heavenly conflict. If you want to know what spiritual battle feels like, it’s choosing to do things that take energy when you are tired. It’s pushing yourself to repeat chores which are mundane. You fight by forcing yourself to talk about things which are difficult to people who do not want to listen.

More than that, any person in ministry must tend to their own spiritual nourishment and growth. Paul implores Timothy to present himself before God as approved and as a worker who needn’t be ashamed but rightly handles the word of truth (2 Tim 2:15). This is also a spiritual battle to be undertaken with seriousness. Fathers, I entreat you to look to your spiritual growth, toiling and struggling with all of Christ’s own energy (Col 1:29). Each of you love your own wife as you love yourself by leading in discipleship (Eph 5:28-29). Mothers and fathers, fix God’s word in your hearts and teach it to your children (Deut 11:18-19). Make this spiritual battle a priority. Take the time to have regular family devotions and discipline your children in the Lord. If you are God’s children, you are ambassadors to the unsaved; and if you are parents, you are missionaries to your own children.

Posted by Seth and Becca Mallay on Monday, February 24, 2020