David’s life and deeds are worth pondering. I’ve been reading through 2 Samuel and 1 Chronicles over the past few weeks. In the 12th chapter of 2 Samuel, David was about to lose his and Bathsheba’s first child, stricken ill as a consequence for David’s own sin. David was in absolute anguish. He spent seven days on the ground without food as he prayed to the Lord for his son’s deliverance. The baby died.

It’s rather a discouraging story on its face. I honestly can’t think of a loss greater than the early death of one’s own child. I’ve seen that sorrow firsthand. I was about five years old when I watched my own parents as well as my grandparents each suffer the loss of a child. I also think back on the Togolese mother who lost her baby in childbirth last Christmas. This is one of many examples, but I don’t think I’ll ever forget the contortion of absolute grief in that mother’s face when I told her that her baby had died. I wrote about that story in the post titled A Christmas Miracle. Naturally, such affliction is averted if at all possible, but for some it arrives all the same.

How does one approach the all-powerful, creator God who allowed such tragedy? I can assure you that there are as many reactions to grief as there are opportunities to express it. The element of David’s story that caught my eye this time was his response once his child had died. David got up, washed himself, and went to the house of the Lord and worshipped. David worshipped the Lord at the pinnacle of his sorrow. The very same God with whom he had just been pleading for the life of his child. That is a man seeking the heart of God. That is God's own power at work.

Recently, Arwen had some scans repeated to assess the progress of her chemotherapy. By all appearances, there has been little to no change. After the misery of four cycles of chemo and all the associated side effects, we’re tempted again to be fearful and discouraged when we don’t see fruit. It is the Lord who truly sees and He who will be glorified. We know this to be true. We worship the Lord.

The next step in Arwen’s journey was supposed to be a near total surgical removal of the main tumor. The expectation was that everything would have diminished in size. Since that is not the case, the operation will go on as scheduled, but likely will not result in removal of as much cancer. The next phase of therapy would have been stem cell transplant with immunotherapy in the distant future. Based on the scan results, however, the immunotherapy will be moved up and stem cell transplant postponed. All of this is just man’s small part. The Lord is indeed our Shepherd – we will not want for anything. 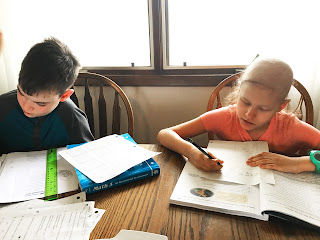 We have enjoyed a couple of weeks home together as a family. Arwen has been feeling mostly well and usually is in good spirits. A few weeks ago, on a day when Arwen was actually feeling particularly ill, it was her turn to pray for someone during family devotions. Generally we think of a friend or missionary family to pray for. Arwen prayed for her mom and dad...we cried as she prayed for our strength and encouragement. These are honestly very precious moments as we spend time together and continue in family devotion together. We are learning new things about the grace that God extends toward us. Scripture repeats often that God’s love is steadfast and that his mercies are unending. We encourage you all to turn your face toward Him no matter the circumstance. Worship the Lord.

Prayer requests:
We do not yet have a time but expect Arwen’s operation to take place in Ann Arbor on May 9th.

We fight discouragement whenever we hold onto a hope or a plan that is taken from us. Would that our only hope was in Christ.

God has provided for our living in the US and we expect that He will continue to meet our needs.

www.mallaysonamission.com
Posted by Seth and Becca Mallay on Friday, May 04, 2018