Shipping the Container to Togo!

For those of you who prayed with us concerning this or for those who are simply interested, here is a brief account of getting the container on its way!

For months we had been packing our belongings, ordering supplies, and acquiring furniture in order to fill our 40-foot shipping container to be sent to Togo. Thanks to the generosity of many of you, it was filled and ready to go by December 6th. I spent more than one cold and dark evening rearranging furniture and crates to try and make everything fit (it didn't all quite fit in the end...we had to leave a few pieces of furniture behind). Yet, the doors were closed and the container was ready to be hauled by December 6th.

Because the container was located on a hill, in the forest, up a curved driveway, on a dead-end dirt road, our goal for months had been to beat the Michigan snow in the hope that we'd be able to load the container without too much complication. Unfortunately, the forwarding company was having a hard time finding a crane company who wanted to drive out to our small patch of nowhere and lift the thing. Eventually, a truck to pull the container and a crane were scheduled to come and remove the container on December 14...two days after we had our first real snow of the season (oh no!).

The crane operator showed up a little bit earlier than the scheduled time of 10 am, and despite the snow he didn't have too much trouble setting up on top of the hill near the container. 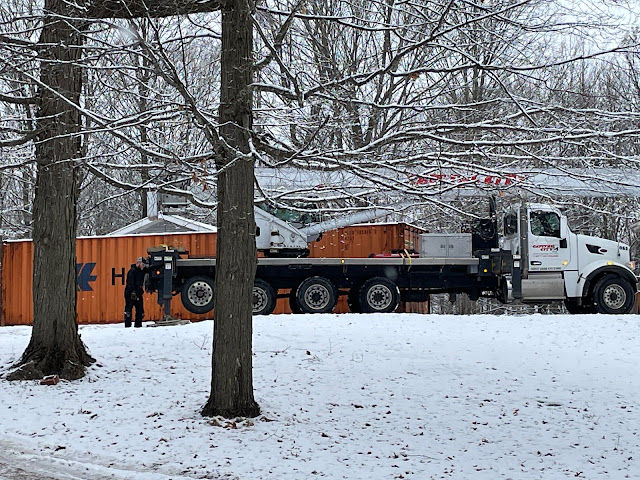 The trucker, on the other hand, had some difficulty finding the place. Driving in from Chicago, he called around 10 am, concerned because he was driving into what looked like a "forest." Yeah, he was in the right place but running a little late.

When he finally arrived around a quarter after, the crane operator explained how he would need the trailer BACKED up the circle drive, around a corner, up the hill, and right up next to the container. The truck driver did not feel that he could get up the driveway at all given overhanging branches and the thin layer of snow-turned-ice on the drive.

We acquired a chainsaw and the crane operator set to work on removing branches from a few trees while I drove to the nearest hardware store for salt. Upon returning with 160 pounds of salt, I learned that the truck driver did not believe he could turn his truck and trailer around to back up the driveway. At this point, the trucker was threatening to give up and leave. The crane operator convinced the trucker to back half a mile back down the dead-end road, turn around, and then back all the way back up to our driveway. We salted the driveway for the next half hour while the trucker did this. 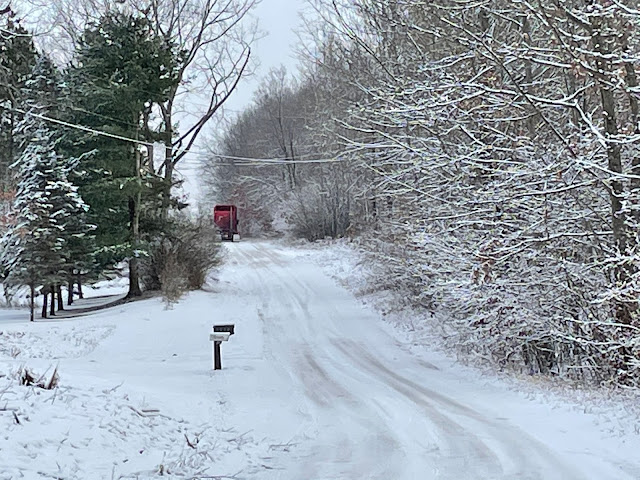 Once the truck was backed up to the drive, trees trimmed, and drive salted, the driver started to make attempts to back up the curved, uphill, now muddy driveway. It was probably around his 6th or 7th try that I had Rebecca put out a call for prayer. The driver was consistently getting stuck about half way up at the point where he needed to turn. He probably tried 15 or 16 times unsuccessfully. It was at this point that the driver told us again that he might just have to leave. Once again, the crane operator saved the day by suggesting a different approach to our problem. He convinced the truck driver to unhitch the chassis at the tricky bend... 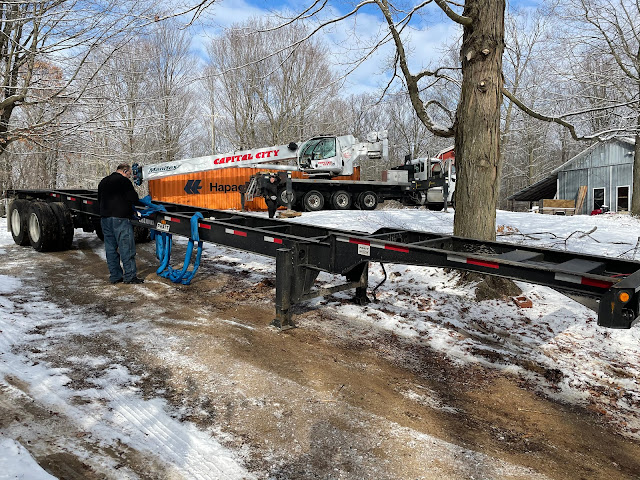 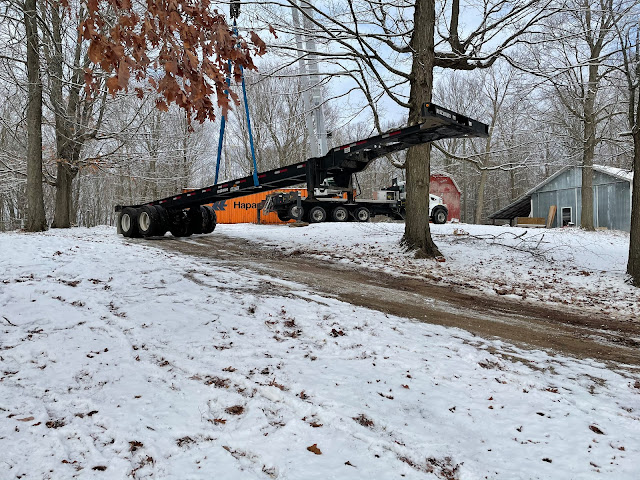 ...and the crane operator would lift it up the hill and into position. Of course, the crane had not been set up to turn so far in this direction. After tying all the rigging to the trailer, the operator had to reattach everything to the container to move that out of his way to swing far enough over to get to the trailer. This happened a few times, actually, as there was little room to move the container and he kept edging it over, climbing out, undoing/redoing all the rigging, etc.

Now several hours past the expected timeframe, we finally had the chassis up by the container. It was much easier for the trucker to back up the drive without the trailer attached, and he was re-hitched after just a few tries. 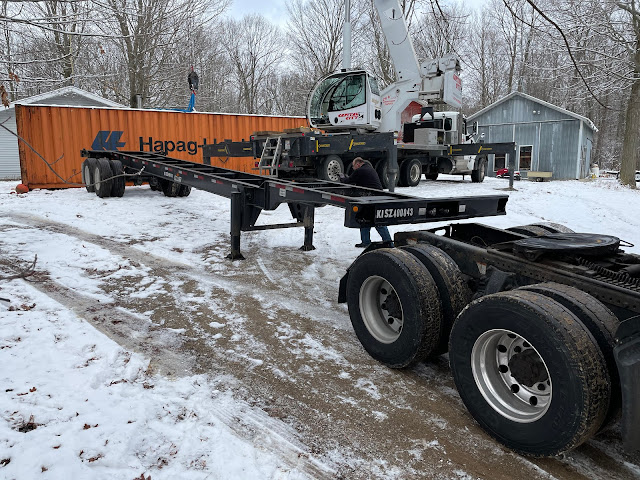 Once everything was in place, it was "simply" a matter of reattaching everything to the container and slowly lifting it up. 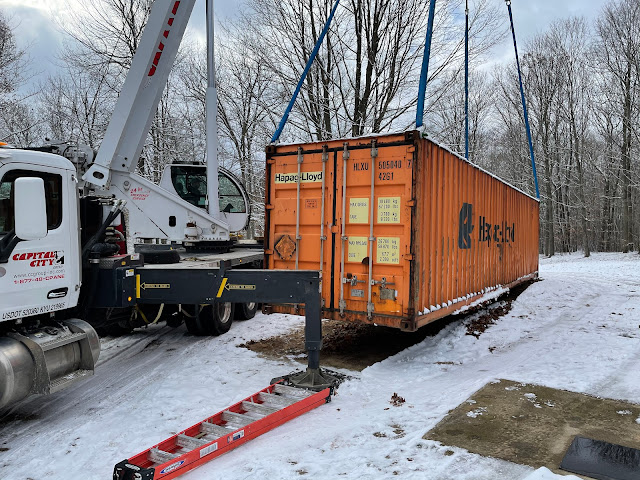 The operator did ask that the driver and I turn and direct the container once it was in the air. The driver preferred to wait in his truck, so I managed that part myself. Turns out 25,000 pounds isn't too hard to manipulate once it’s in the air! 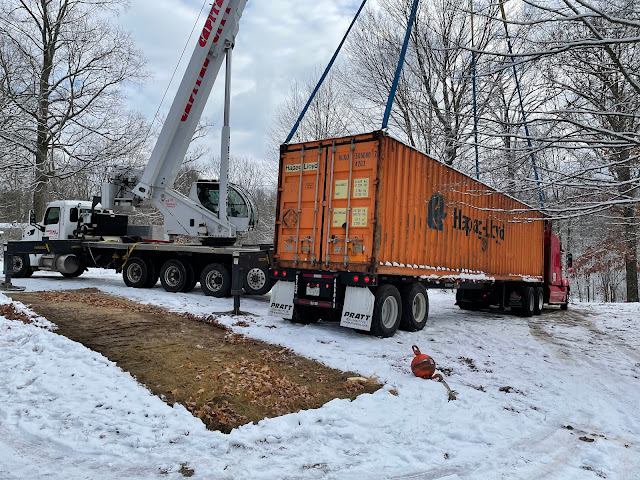 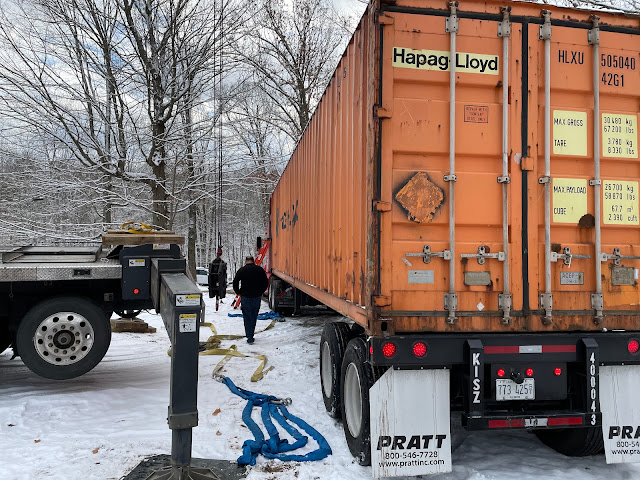 All said, it took several hours longer than we hoped, but by God's grace it was accomplished! We are so thankful that God sent the crane operator that he did. That gentleman was so experienced and capable, and I don't think we would have shipped the container until spring if it had not been for him. As it is, the container was carried down to Chicago to be loaded on a large cargo ship and should arrive in Togo sometime around January 26th!

Pray with us, if you would, that the rest of its journey would be smooth and that the process of delivery and unloading (in front of customs officials) would also work out well.

To help with these and other expenses, feel free to donate to our mission account: https://www.abwe.org/work/missionaries/seth-and-rebecca-mallay

Posted by Seth and Becca Mallay on Monday, December 28, 2020